Thoughts on Around the World In Eighty Days by Jules Verne 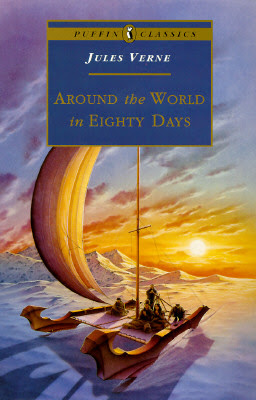 In 1870's London, Phileas Fogg and his servant, Passepartout (two of the awesomest names in literature, by the way) set off on a trip around the world to test the reliability of modern travel.  Phileas placed a bet on his ability to complete the journey in eighty days or less in the amount of twenty thousand pounds; and, since he took another twenty k with him for expenses, his entire fortune is resting on the success of the journey.

I had the same problem with this book that I did with Monkey--essentially, there's a lot of plot (and the story is told really well), but I simply could not connect with the characters.  Phileas Fogg seemed cool at first simply because he was so weird, but his personality didn't expand at all beyond my first impression of him.  Indeed, I viewed him more as a symbol of modernization--he's always precise, on time, regulated and repetitive, not to mention cold and impersonal--than as an actual human.  Passepartout was also initially interesting, but he's not enough to balance out Phileas.  I'm essentially a character girl, and if I don't care about these two characters, why should I care if they get around the world or not?  Especially when the whole endeavor to begin with seems at best silly and at worst idiotic.

Another thing that bothered me about the book was the modernization--or, more specifically, the ambiguous way Verne treats modernization.  The trains and steamers have allowed for what is really the modern tourist--rushing to get somewhere for a few hours, then rushing to the next stop.  If you're looking for a travelogue, this isn't it--Phileas just wants to get from one place to the next and counts stopping in a city for a few hours as "seeing" it.  There's also a great deal of talk about time and time zones in the book, which fits in with the theme of modern travel, since trains are what made it necessary to institute time zones in the first place.

Personally, I found it all a little cold and soul-sucking, but I wonder if Verne felt the same?  Or maybe he thought this new technology as teh awesome?  It's difficult to tell from what I read of the book.

Anyway, I didn't finish it.