Classics Month Meme: How Far Is Too Far? 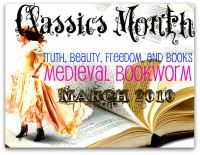 As Nymeth from Things Mean a Lot pointed out in a recent post, a lot of literature is in conversation with or taking inspiration from other literature.  "You don’t need to have read these other books to understand what’s going on in this story, but you’ll likely have a lot more fun if you have."

But where does one draw the line between conversing with other books and relying them on to prop your book up?  Cthulhu get so many mentions in novels these days, it's practically a steampunk cliché.  Lots of contemporary novels borrow whole plots from classic literature--Bridget Jones' Diary, for example.  What about borrowing characters, like Austen adaptations?  Or taking an entire classic novel and rewriting it into a different, modern genre, like with Little Vampire Women?

One book that really impressed me with its reworking of a classic novel was Just the Sexiest Man Alive by Julie James.  This book obviously took inspiration from Pride & Prejudice, but adapted it to present-day Hollywood very creatively.  If there hadn't been some lines in the book to clue me in, I don't think I would have even noticed its similarity to P&P (but I do see P&P everywhere, so maybe I would have).

On the flip side, a total FAIL adaptation for me was Jenna Starborn by Sharon Shinn.  This book proclaimed right on the cover that it was "a brilliant new twist on the classic story of Jane Eyre."  I love Sharon Shinn; and as most of you probably know by now, I love Jane Eyre, so this book should have been the easiest sell on the planet.  Unfortunately, I found to be just too derivative.  It was exactly like Jane Eyre--the "twist" was that it was set in an interstellar future.  But Shinn didn't do enough integrating the world with the plot to make it feel like an adaptation so much as a copy, which left me wondering why she even bothered to write it in the first place.

Now it's your turn!  How far can a modern novel "reference" a classic before it becomes derivative?  What are some books you think were successful or unsuccessful at referencing or using classic literature?

Answer in the comments or on your blog (be sure to leave a link with Mr. Linky if it's the latter so I can check it out).