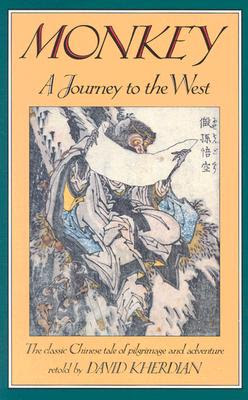 If you've followed this blog for a while, you might remember that a few months ago I read a comic version of this book called The Monkey King because Jeff Markowitz recommended it.  Then I saw the actual book at the library book sale and naturally I had to get it.

Monkey is an ancient Chinese tale that tells the story of a monkey who is made of heaven and earth.  After this auspicious birth, he leads the other monkeys into a cave behind a waterfall where they're all very happy, and he becomes their king.  But after a few years, he realizes he's going to die and is terrified.  He travels the world for many years trying to find a way to acheive immortality, until he stumbles upon a Buddhist teacher who shows him how to stave off death, turn himself into a tree, and other fun stuff.  Then he gets tossed out for showing off and returns to the waterfall cave, where his fellow monkeys are being terrorized by a demon.  Using his new powers, Monkey defeats the demon, starts building an army, and soon gets into a lot of trouble.

Monkey is one of those books that can appeal to all age groups--it's written in the simple style of fairy tales or fables (although Kherdian, the translator--or "reteller" as the book puts it, which worries me--uses anachronistic language that seems really strange; i.e., "Chill, Monkey!") and I can see it appealing to kids.  At the same time, there's a lot of themes in this book that can make an adult really think, too.  It's a much deeper book than one would expect at first glance.

My main problem with Monkey was, well, Monkey.  To be honest I was kind of rooting for that little bastard to get his ass smacked into the ground--he's rude, arrogant, and a bully.  If there's someone who does not deserve to acheive immortality, it's him.  And is not wanting to die really a good impetus for spiritual growth?  Shouldn't one want to be reincarnated?  Also, that fairy tale, fable-y style of writing has never worked for me, even when I was a little kid.  It's just too hard for me to connect to the characters that way.

So while I do whole-heartedly recommend this book to anyone who's interested in Buddhism or Chinese culture, or even if you're looking for a different sort of fairy tale to read to your kids, I just couldn't get through it.  Not that I've given up completely--I do intend to get back to it.  But I don't think it will happen this month.

Monkey's search for immortality reminded me what one of the main purposes of religion is--to ease our fear of death.  All religions in some way offer a chance at ever-lasting life, or they're not very successful religions.

Yet in the modern world, do the majority of us really believe a religion can make us immortal?  Not just metaphorically or spiritually, but actually physcially immortal?  No.  But science--science does hold the possibilty of that, as books like The Adoration of Jenna Fox demonstrate.

So after reading Monkey, I'd have to say that science really is the new religion.  Which is sad.

And even though I didn't like Monkey, I do have to confess that it's revived my interest Buddhism yet again.