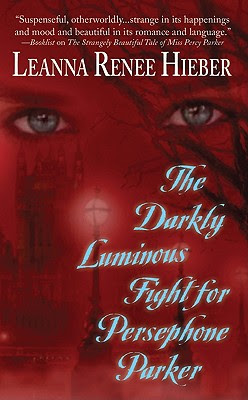 Pre-order this book at an independent bookseller near you (via IndieBound).

The Darkly Luminous Fight for Persephone Parker is the sequel to The Strangely Beautiful Tale of Miss Percy Parker, and picks up right where that book left off.  Because of this, I don't think it's possible to review the book without spoiling its predecessor (even the title is a spoiler to some extent)--so if you haven't read Strangely Beautiful yet, you might want to skip to the end of this review.

Now onto the good stuff, to wit:  I enjoyed the hell out of this book!  I think it's actually about ten times better than Strangely Beautiful: more romantic, and with a better story.  When the book opens, we're at Athens Academy right after Percy has tossed the Gorgon and Cerberus back into the Whisper World.  But instead of seeing things from the perspective of one of The Guard, we're introduced to Beatrice, a ghost and former Guard member herself.  This seems like little more than a creative way to do backstory, at first, but it actually sets up the entire plot of the book beautifully.

You see, even though Percy has found her goddess powers and closed the portals between the worlds, Darkness still wants his Persephone back.  Meanwhile, Alexi is insisting that he and Percy need to be married right away and they're going to have a honeymoon if it kills them.  Normally this would be problematic enough considering Alexi's job on The Guard; but unbeknownst to Percy, her goddess self had a much bigger purpose in becoming a mortal than just closing the seals between worlds and gettin' it on with the hawt prof.  When Alexi finds out about this--and discovers just how dangerous her mission is going to be--he is none too happy.

I think even if you had some problems with Strangely Beautiful, you're going to like Darkly Luminous.  My personal issue with the first book was Percy and Alexi's relationship, and how unequal it was.  In this novel, Hieber confronts the fact that Alexi is--or was--Percy's professor, and that he's almost double her age, more directly.  Percy is still very young and not entirely sure of herself, which is honestly something I found a bit disturbing at times; but she gets more assertive as the book goes on, and I thought Alexi's authoritarian moments were well-explained and handled by all the characters.

Plus, if you were interested in the story of the other guard members, that's nicely fleshed out and concluded here.  Elijah has several great scenes, and I actually really adored his relationship with Josephine.  We also find out more about Jane's ghostly romance.

The only part of the book I didn't like was the conclusion to Rebecca's story and her love for Alexi.  I just found it unbelievable and wayyyy to easy.  Michael's great, but is he really her equal in intellect and personality?  I just wasn't feeling it.  The book also dragged a bit in the middle, when everyone gets a time out for Alexi and Parcy's honeymoon; but otherwise, the beginning and end flew by with amazing swiftness.

If you're looking for an atmostpheric Victorian novel with adventure, ghosts, travels to the Underworld, and romance, this is pretty much it.  I don't recommend reading this one before Strangely Beautiful, but if you've already done so, dig right into Darkly Luminous as soon as you can.  In fact, re-read the first book before you start this one--you'll thank me later.

Thank you to Leanna Renee Hieber for providing me with an early copy of this book!  The Darkly Luminous Fight for Persephone Parker will be released April 27th, 2010.