Rupert of Hentzau by Anthony Hope 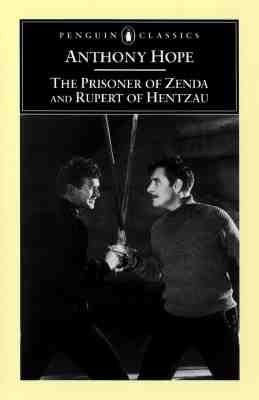 As I mentioned in my review of Prisoner of Zenda, the evol villain Rupert was my favorite character in the book.  Therefore I was really excited that the sequel was titled Rupert of Hentzau.  Unfortunately, I don't think it was as good as Prisoner.

The book opens several years after Prisoner concludes.  The king has never fully recovered from his ordeals in The Prisoner of Zenda.  He's sickly and pale, harbors jealousy toward his doppelganger, and still lives in fear of Rupert Hentzau--who like any good villain managed not only to escape, but raise himself in stature from a normal man to a count.  Meanwhile, every year, the Queen sends a rose and a note with Fritz Tarlenheim, who meets her true love somewhere outside of Ruritania.  At the beginning of the book, Hentzau steals the Queen's note from Fritz with the goal of taking it to the King.  Rudolf, Fritz, Sapt, and some new characters go chasing after Hentzau in an attempt to recover the note and protect their queen.

The entire story is told, not from Rudolf or Rupert's viewpoint, but from that of Fritz--which is kind of odd, since he misses a good portion of the action in the book.  I didn't mind that too much, however.  I loved catching up with all the characters from Zenda and seeing Rudolf and the princess together again.  Plot-wise, this sequel is probably better constructed than Zenda, too, although it feels like it moves more slowly.

My main problem with the book is that Rupert of Hentzau is hardly in it!  He might get twenty pages, max.  I thought he would be all over this novel, since, you know, it's titled Rupert of Hentzau (although come to think of it, The Prisoner of Zenda didn't devote much time to the prisoner of Zenda, either), so I found that not only disappointing, but confusing.  Around the middle I felt very confused as to where this book was going and started to skim through a lot of parts, which helped to pick up the pace and keep me reading.

I was also very frustrated with the entire conclusion, which didn't advance any of the characters forward.  In hindsight, I suppose I should have expected it, but I didn't.  And to be honest, I feel a little manipulated into not expecting it by the author.  What exactly was the point of the running around and crap that everyone went into just to protect the freaking queen's reputation?  And, let's face it, it's not as if she didn't love someone besides the king, is it?  I'm just not sure it was worth it.

Don't get me wrong:  I still liked this book.  It just wasn't as ridiculously awesome as Prisoner of Zenda.  I don't think it has as broad of an appeal, either; there were times when I was reading where I thought this was a definite "guys" book.  But if you read and like Prisoner of Zenda, it goes without saying that you have to read Rupert of Hentzau--just don't expect a lot of Rupert in it.