Little Vampire Women by Louisa May Alcott and Lynn Messina 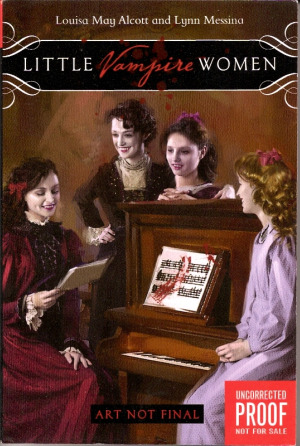 Pre-order this book at an independent bookseller near you (via IndieBound).

First line:  "Christmas won't be Christmas without any corpses," Jo grumbled, lying on the rug.

You didn't think I'd be able to do a Classics Month without an adaptation or retelling, did you?

Actually, I got this book a bit by chance.  Pam from Bookalicio.us heard me whining talking about the original Little Women on twitter and offered to loan me Little Vampire Women to see if I liked it--and I did!  I found this rewrite a lot more enjoyable than the original, I have to say.

Before you die of horror, let me explain why:

Little Vampire Women is basically the original Little Women, edited down to a much shorter length, with more modern writing (i.e., that Victorian thing where it takes them ten words to say what we would in three?  Gone), and the March family as vampires--but very moral and upstanding vampires, of course.  Instead of being a writer, Jo wants to be a Defender, a vampire who hunts down pernicious vampire slayers.  Basically it's the novel re-written as if we lived in an alternate universe where vampires exist, complete with scholarly footnotes on vampire history and literature.

As I said, this is a much quicker, easier read than the original.  I think people who love the original LW will enjoy this book the most--it's full of clever little twists and jokes that you won't get unless you've read the original novel.  For someone who hasn't read LW, this book will probably be just okay--the writing and plot are decent, although the language is sometimes jarringly modern.  It certainly doesn't surpass the original, and Little Vampire Women's strength mainly lies in how it plays off its forebear.  But like I said, it's fun.

One thing that really annoyed me about the book, though, is that Jo is the LAMEST Defender I could possibly imagine.  She never apprehends a single slayer, can't even catch a stake that's flying right at her, and I'm supposed to believe that she's this great vampire?  Uh, no.  It was so bad that when she considered giving up being a Defender, I was totally on board with it and disappointed in her when she decided to stick it out.  Also, I just missed Jo being bookish and into writing!

But really, this book is just a fun, silly read that I think succeeds in its main purpose: to entertain.  And since I needed some entertainment this week, it was very much appreciated.