A Conspiracy of Kings by Megan Whalen Turner 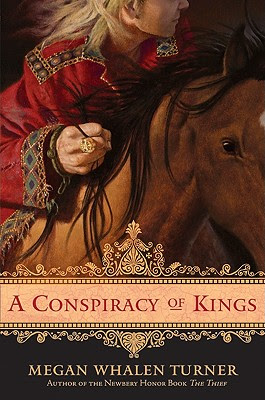 This is the fourth installment in Megan Whalen Turner's series that focuses on the fortunes of Eddis, Attolia, and Sounis--three countries that exist in an alternate-universe version of Ancient Greece and the Near-East.  The Queen of Attolia, the second book in the series, is one of my favorite books, evar, and A Conspiracy of Kings is another great installment (although not really as good as Queen).

Eugenides is the major character in all the books (he's taking over the world--seriously), but this book is told from the perspective of Sophos, the recent King of Sounis.  You might remember Sophos from The Thief (if you don't, don't worry--I don't remember him from that book, either).  The majority of it is told from his point of view--how his family was betrayed by the Barons of Sounis, he was kidnapped and sold into slavery, and how he managed to escape and become king--not just in name but in actuality.

This is one of those "journey" books, and although I found it a little unbelievable someone as shy as retiring as Sophos would suddenly whip it out--so to speak--I loved how Sophos evolved, and the story was well-told.  I was involved in his story and invested in the outcome of his journey.  No, he's not as charismatic and clever as Eugenides; but he is intelligent and sensitive, and actually very courageous.  Overall, Sophos is a very worthy hero material.

What I didn't like so much was the political yammering.  If you think real life political alliances are boring, just imagine how much fun it is with imaginary ones.  There's also a romance subplot, if one can call it that, that's very much kept in the background.  I had absolutely no problem with it until the end, which was borderline nonsensical.  I'm also all tense and on tenterhooks now about what will happen in the next book.  Arrrgh!  The combination of incomplete and cliffhanger ending made me want to throw A Conspiracy of Kings against the wall--especially since I have a feeling Eugenide's and Sophos' conspiracy is only just beginning.

Overall, though, this book was pretty good.  I of course wish Eugenides had been the main character again, but I think Turner was right in designating this portion of the tale as Sophos' story.  And I don't want to wait three to five years for the next book to come out--but I will.  Seeing as I don't have much of a choice.