The Lost Summer of Louisa May Alcott by Kelly O'Connor McNees

Proposed alternate title: She's Just Not That Into You 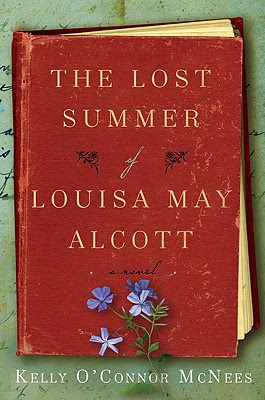 This is a wonderful, engrossing read that I gobbled up in two days.  It has the Americana charm of Water for Elephants, the romantic angst of a YA novel, characters that you'll fall in love with (or at least be invested in), and it's researched out the wazoo.  Basically a perfect bite of historical fiction, as far as I'm concerned.

It's the summer of 1855, and Louisa May Alcott is moving--unwillingly--to Walpole, New Hampshire, with her family.  Louisa has only one thing on her mind--getting to Boston and getting published--but circumstances collude to keep her in Walpole, where the temptingly muscled Joseph Singer keeps lifting heavy things and being all nice and charming.  Damn him!  Doesn't he know a girl has to focus?

So that's basically the plot.  But the book isn't really about that.  It's about the intellectual and artistic scene that the Alcotts were a part of, and the fringe elements of society that influence the mainstream, and how America is constantly torn between idealism and commerce.  Practically every major character in the book faces this question at some point, but the best example is of course the Alcott family itself--Bronson Alcott, the most compelling character in the novel, is pure idealism.  He would rather starve or be killed than compromise his ideals in any way.  This is quite admirable; but more troubling is his willingness to let his children suffer in service to his idealism, as well.

In many ways, Louisa is just like Bronson--she doesn't strive for idealism, but for publication, financial security, and independence.  Just like her father, however, she's completely unwilling to compromise in order to get those things, and I think causes a similar wake of human misery as a result of her actions.

Surprisingly, the one aspect of this book that didn't really work for me was the romance.  I'm passingly familiar with LMA's biography, so I knew how it would end--but even if I didn't, it's pretty clear from the start Louisa has zero interest in a long-term relationship.  As for what Joseph sees in her, I have no idea, and I remained unconvinced that they were in love (especially Louisa) through the whole book.  But then, knowing how their relationship would turn out, I might have also stopped myself from getting too invested in it.

As for McNees' writing, I think it's simply brilliant.  I was a little worried at first because I think she has a tendency toward TMI descriptions, but that was actually kept under control for most of the book.  Otherwise, she just sucked me right into the story and the world of 1850's New Hampshire, and I now officially love that world.  I cannot wait for her next book!

If you have any love for historical fiction at all, I think you can't help but enjoy this novel.  I'm so glad I signed up for the reading series of TLSoLMA on Hey Lady! Whatcha Readin'? and want to thank Trish and Riverhead Books for providing me with a review copy for the read along.  Be sure to stop by Trish's blog on April 14th to read or participate in our group discussion--I'll be sharing more thoughts about the characters and the book then.