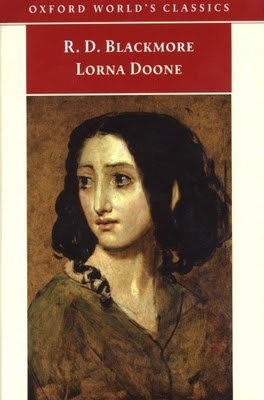 <-This cover bothers me.

Find this book at an independent bookseller near you (via IndieBound). (or just download it for free from GoodReads)

For Classics Month, Meghan and I decided to read Lorna Doone together.  It's the story of a young farmer in Exmoor who falls in love with the daughter of the leader of a gang of thieves who murdered his father (more or less).  This is part two of our joint review.  For part one (and a more complete summary of what the book's about), go to Meghan's blog, Medieval Bookworm.

Me:  The infantilization of Lorna--her being all cute and delicate and innocent *gag*--did kind of bother me. But she's no simpering idiot. After all, when John first asks her if she loves him, she's like, "No?" which I think showed she had some intelligence and a mind of her own, anyway. And she's the one who really dictates the rules of the relationship, when they're going to see each other, when they're going to get married, etc., so she's not a powerless puppet. Even though she cried a lot.

Meghan:  I like your idea about the knight in shining armour - I can definitely see that. I thought she might leave him when she went off later in the book - not to give anything away - but sadly she did not. LOL. It was John's attitude that bugged me, not Lorna herself. I had a hard time imagining any of the women as actual, mature women just because he was always talking about how tiny they were and things like how white their skin was, that sort of thing. And it's true that he was a giant but it sort of put me off that I couldn't imagine any of them as actual people.

I didn't mind Lorna so much compared to him. I laughed when she said "no" as you just mentioned. But overall I just thought the depiction of women was annoying even if they fought it with their actions.

Me:  The portrayal of Lizzie was annoying, just because she was the only female in the entire book who would actively stand up to John and he hated her. But I just wrote that off as sibling rivalry. I was surprised at how John's mother was depicted, because in the miniseries she's a very strong woman, and in the book she seems a lot weaker. But I don't think John was as misogynistic as you do--I think he does respect the women in his life, even if he occassionally denigrates them. I don't think John would view it as denigration; he was just raised in a time and place to think like that. I admit I would have liked it better if he questioned those beliefs.

Meghan:  I do agree that he was a product of his time. I tried to treat him as that, but it just made it hard for me to like the book and to like him. I know I've read Victorian novels where such things really didn't get to me as much - I think Blackmore laid it on a little too thick. I didn't think he was consciously doing it but I guess I still got annoyed!

Me:  Was there anything you liked about the book? How about those descriptions of nature? ;)

Reply
Edit
Meghan:  I genuinely skipped the nature bits as I got towards the end. So I probably shouldn't count myself as having read the whole book, I just skimmed them to see when the action started. But then I have always really disliked anything with in depth descriptions of nature, especially when it just goes on and on, LOL. I generally liked it better when something was happening and there wasn't too much wordiness going on. So, the fighting scenes were better and I loved the drama at the end, just because it was such a change from the painfully plodding pace of the entire book.

I wish I could say I liked the romance part as well. I thought John and Lorna were sweet occasionally but I just had too many issues with him to really care, and I never understood (as we mentioned) the basis of their relationship besides his obsession with a pretty girl.

What were your favorite parts?

Me:  The parts with Lorna in them were definitely my favorite. I have to admit that I did like the romance and the way Lorna and John interacted, but then I didn't have a problem with John. I don't think he was just obsessed with her because she was pretty; that for me was the point of the whole Ruth thing. Even if it did seem like he was leading her on, it seemed like Blackmore was trying to tell us that John isn't just a sucker for a pretty face or someone he can get along with, or he doesn't like Lorna just because she's there and willing. You know, he has options and stuff. :P
I skipped the battle parts of the book. lol The nature descriptions weren't too bad. I did love how all the animals had their own personalities, just as if they were people, and John got along more with some animals than with others--like Winnie and that one horse he rode at the end of the book. Knucklecrusher or whatever its name was.

Reply
Edit
Meghan:  I liked Winnie, too. I thought that was a nice touch. And John had options, but everyone complained about Ruth and how she was too small (because being a little bit small is okay but not very small??) so I felt a little sorry for her, being a small person myself. They would have made a funny-looking couple but it was pretty clear she liked him.

I'm not always the person that hones in on the action, I just think that I found the rest of the book so boring I was happy when something else happened! I really think it was about 200 or 300 pages too long.

Me:  Definitely. This thing's a chunkster. I do have to admit that by the end I was skimming practically everything. I can't imagine anyone sitting down and writing this out long-hand.

Meghan:  Me neither! I really just wanted to get it finished. I hate reading books that take longer than a few days as it is. This one took me practically a month and I can't even remember the last time that happened. I think it would have languished forever if we hadn't been reading it together.

Reply
Edit
Me:  I know! The only reason I kept reading was because you were reading it with me. :) I'm really happy I finished it, though. In the end I think it was worth it.

Reply
Edit
Meghan:  I still haven't decided if it was worth it for me. I hadn't really heard of it until I got this set of books but apparently it's pretty big over here in the UK, my husband had thought it was really famous. He kept asking me why it was a classic when I complained about it so much! But I'm glad I can cross it off my list permanently now, and I do intend to watch the mini-series when I get a chance.

Reply
Edit
Me:  I think he should read it, then! ;) The only reason I'd heard of it was because of the mini-series, and the first few times I watched that I had no idea what the setting was. I thought maybe Appalachia? The Doones are super red necky.

Reply
Edit
Meghan:  He'd never get past the first page unfortunately. He's not too patient with books (or anything). There are a lot of British classics I never heard of until I actually came to England, but so many book bloggers know about them that I wonder often if it's just me. This was definitely one of them and I can see why it hasn't hit the American high school or even college curriculum.

Reply
Edit
Me:  This book is a pretty hard sell. I haven't had so much pain over reading a book since... Hmm, Dickens? I don't even remember. But I actually would recommend it to people with patience and those who've seen the miniseries.

Reply
Edit
Meghan:  I would say that I liked Dickens better. ;) I might recommend it to someone who really enjoys lingering in a book for a long time, though. I'm just not that person.