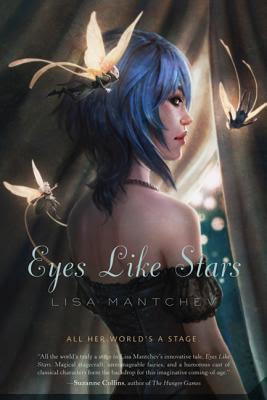 This book is a wonderful, creative story and an absolutely enthralling read.

Beatrice Shakespeare Smith lives in the Théâtre Illuminata, a magical theater powered by a mysterious book that contains every play ever written (but no Death of a Salesman, as far as I could tell), and every character ever penned for the stage.  But Bertie isn't a player--she's a human girl who was abandoned by her parents for reasons unknown and allowed to grow up in the Théâtre.  Now that Bertie's a teenager, the Theater Manager has decided what most people conclude in regard to teenagers--that she's more trouble than she's worth.  He threatens to throw her out into the dreaded Real World, but Bertie convinces him to give her one chance to prove she's invaluable to the Théâtre and claim a permanent place inside it.

You know that feeling when you get completely sucked into the world of a novel?  For me that happened around page two.  I fell in love with the magic of the Théâtre and could completely picture everything in my mind.  It's not that it's realistic--it's better than realistic.  It's like a painting come to life and layered with story, and it feels at once totally familiar and charming and original.

The characters are also fantastic.  Bertie's sweet but admirably tough, and I loved the four fairies who were her besties.  Then there's the various love interests--Ariel, who Bertie is constantly warned is dangerous (no explanation given as to why), and with whom she has a history; and Nate, a pirate from The Little Mermaid with only one line.  His piratespeak is a little jarring, but he's very sweet and actually not that piratical.  I'm not sure which team I'm rooting for with these two yet--Ariel is definitely the most intriguing of the pair, but I don't feel like his and Bertie's relationship is really equal at this point.

But despite all these good points, what really keeps you reading are the questions--what is Ariel up to?  Will Bertie find a way to stay in the Théâtre?  Will she find out who her parents are?  The answers to the questions are just as satisfying as the characters and setting.

I'm so glad Pam from Bookalicio.us convinced me to read this book--to be honest, I didn't think it was a book for me.  I know nothing about the theater, and I'm hardly the type of person to quote Shakespeare.  But, I was totally wrong--the book is very theater-heavy, and I did have to look a up few unfamiliar terms, but I like learning things while I'm reading.  And the novel was just so good, it didn't matter--the story's enjoyable whether you're up on your soliloquies and monologues or not.

Seriously, you NEED to go out and read this book.  It's a great fantasy and so much fun.