Nana and the Gaze 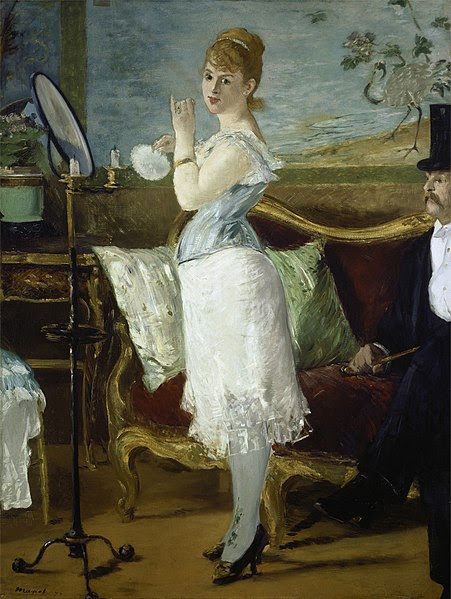 
I've blogged about the Male Gaze before--today it seems like an intellectual term invented by feminist art historians, but it was an actual thing that existed in the late 19th century.  Men had the power to look, because by looking they owned what they saw, including women.  Women, meanwhile, were supposed to keep their heads down and be demure--but this rule didn't necessarily apply to those women who lived outside the rules of bourgeois society, namely courtesans and prostitutes.

Therefore it's no surprise that Emile Zola's Nana is full of looking--the men who feel free to look at every woman, and appreciate (read: lust over) Nana despite her lack of any discernible talent; the respectable ladies who are really only allowed to consume with their gaze at the Opera or Salons; and the courtesans/actresses who challenge male power by meeting their gaze full on.

Nothing shows how the gaze equates ownership in Nana so much as some of the first scenes in the theater.  During intermission, the men discuss where they might have seen Nana before--on some street or cafe in Paris.  As readers, we assume that they probably haven't seen her--but by claiming that they have, they assert some ownership over her.

This may all seem like a horrible objectification of women, and it is; but in Paris, this was the way a young woman could hope to gain wealth and fortune.  As critic Armand Silvestre said in 1888, "every woman who thinks herself beautiful imagines herself Semiramis or Catherine or Fredegonde or simply Olympia. The unfortunate adventure of Nana hasn't discouraged anyone."  Even Nana objectifies herself and her own beauty, owning it by looking at it, "absorbed in enraptured contemplation of herself."

Nana's avaricious gaze extends not just to herself and her audience, but at places--like the races--where any respectable lady would keep her gaze lowered.  Nana instead scans the field with a large pair of binoculars, and looks all the other ladies in the face.  Nana's gaze frightens and seduces men like Moffet, and threatens women like the Comtesse Sabine.

With all this talk about courtesans and looking, it's no wonder that artist Edouard Manet, the king of The Gaze, adored his friend Zola's Nana.  His most famous painting of a courtesan challenging the Male Gaze is Olympia (see the Silvestre quote above); but he also named a painting with similar themes after Zola's heroine.  The model is real-life grande cocotte, Henriette Hauser.  She stands in her underthings, applying make-up before a mirror while a gentleman (holding a cane in his lap--think cigars here, people) watches her in the mirror's reflection.  Nana--or Henriette--meanwhile, looks out at the viewer, the entire focus of the painting, seeming to defy the viewers' presumed right to observe her.  Even though women like Nana--as we see in the book--are seen as little more than sexual snacks, the woman in this painting dares you to objectify her--unless you want to be trapped in your own gaze, as the gentleman on the right seems to be.

Manet's Nana was rejected from the 1877 Salon, not surprisingly; in response, he displayed it in a gallery on the Boulevard des Capucines.  Not only that, but it was hung in a window, where the comely courtesan could gaze freely at every man, woman, and child who passed by on the busy street, thus causing more of a scandal than she probably would have in the Salon.

Even though prostitution was an accepted--desired, actually--part of Parisian society, it one that most of that same society refused to speak of.  Events like the theater, which we see in Nana, and the annual masked ball at the Opera (which Manet also painted) were well-known places where poor girls could hook up with wealthy gentlemen, all while said men-folks' respectable wives, sisters, daughters, and mothers mingled in the crowd.

As for the book, Nana, it's surprisingly enjoyable and readable.  Zola drop-kicks us into the middle of 1870's Paris, and you're suddenly surrounded by men in top hats, women with gigantic skirts, and the rush and insanity and craziness of the Variétés.  Can anything be better for a nineteenth-century geek like myself?  I can't believe it took me this long to try out Zola, and I highly recommend this novel for anyone with a passing interest in nineteenth century art or literature.