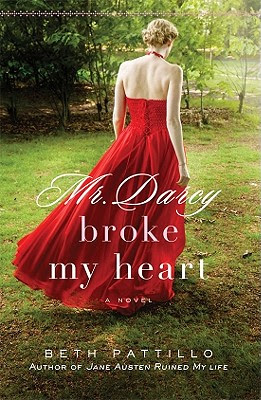 This is a charming, if not groundbreaking, chick-lit novel that uses Pride & Prejudice as its inspiration.  It's more creative than your average Austen adaptation, and overall a very enjoyable read; but I found the ending annoying.

Claire, a member of the recently unemployed, travels to Oxford for a Jane Austen conference in her pregnant sister's stead.  One would expect an Austen conference to be packed, but this one is very small; and Claire is immediately impressed by the handsome visage and rude manners of James Beaufort, who is clearly the Mr. Darcy in this scenario.  Despite the fact that Claire has a boyfriend--although it's nothing serious, as she assures another conference attendee--she and James start dating.

Claire also starts making friends, including the dotty Harriet, who claims to have Austen's undiscovered original draft of First Impressions tucked away in her cottage.  As Claire reads the manuscript and becomes more involved with Harriet, she discovers secret societies, liars and con-men, and that she has more in common with Austen than she thought she did.

This book, as I mentioned, is charming, mainly because it's simply so fantastical.  It feels a little old-fashioned, like one of those Mary Stewart novels where the unsuspecting heroine gets into lots of trouble, but that only added to my enjoyment of it.  The questions in the story are what keep me reading:  What will Claire discover in the First Impressions manuscript?  What is James up to?  Will she return to her boyfriend, Neil?

Unfortunately, the answers to those questions weren't satisfying at all for me, and I hated the ending.  I would have preferred it if Claire had struck out on her own instead of returning to Kansas City with one of the two men who were vying for her heart.  Neither of them were winners--James was a cad, and Neil's only attractions as far as I could tell were muscly arms and his willingness to tile a bathroom.  I mean, really!  Let's have some standards here, Claire.  Furthermore, I felt like the author was deliberately manipulating that situation to defy the readers' expectations (read: wants), which is something that has always annoyed me.

So although the majority of the book was very good, the conclusion really brought it down for me and settled it at just an okay.  I would still recommend it, though.