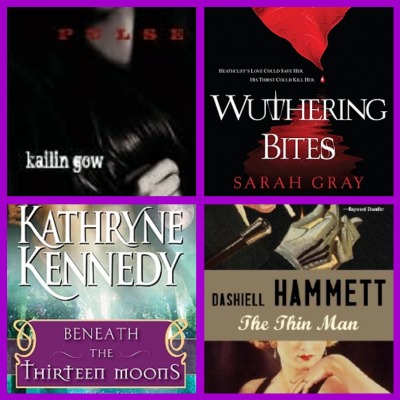 Beneath the Thirteen Moons by Kathryne Kennedy:
This is basically a marriage-of-convenience book set in a fantasy world.  It should have been the sort of book I glommed onto like whoa--you've got magic, true love, mind melds (love mind melds).  Yet it took me over a month to read 100 pages.  The story didn't flow for me, but maybe that was because it took me so long to read.

Pulse by Kaitlin Gow:
This book was totally ridiculous.  The female character was a complete sex object who has magical blood that will make a vampire mortal--IF she's a virgin!  The two vampires were a rip-off of Stephen and Damon from the vampire diaries.  Couldn't take it.

The Thin Man by Dashiell Hammett:
I thought I would like this book because I really like the movie, and enjoyed reading The Maltese Falcon.  It started out good, although the main character is a serious alcoholic; but before I was halfway through it got seriously boring.  I considered keeping it for narcotic effect, but decided there are probably enough boring books out there to replace it.  Oh well.

Wuthering Bites by Sarah Gray:
My mom got this for me for Halloween.  Heathcliffe and vampires sounds like a marriage made in heaven, but the book was closer to the original than I was expecting.  And I'm not a huge fan of the original.  Plus, I was and am seriously pissed that Emily Brontë is mentioned nowhere in this book as the original writer.