The Diamond of Drury Lane by Julia Golding 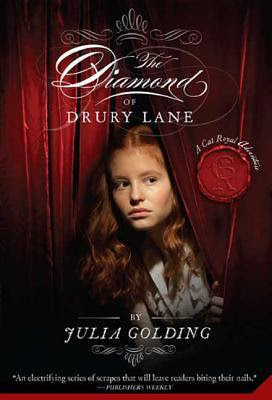 Stereotypes: There are several typified characters: a tempestuous Italian musical director, an idealistic youth, and a street bully.

Major Likes: The narrator's voice and the historical detail

Major Dislike: Felt a little spastic with everything going; not too bad, though.

Cat Royal, a perspicacious orphan with a gift for getting into scrapes, grew up in the Royal Theater on Drury Lane.  She has the theater manager for a father, the costume mistress for a mother, and stage managers, conductors, musicians, players, prompters, and playwrights for aunts, uncles, and friends.  One day she overhears the theater's manager talk about hiding a diamond in the building; sworn to secrecy, she accidentally lets the story of hidden treasure slip to Pedro, an African violinist.  With Pedro drumming up schemes to get rich and Billy "Boil" Shepard threatening to kill her, Cat has her hands full enough for any 12-year-old.  But she also has to rescue and protect the diamond, and write a novel for the delight of a duke, all while saving her friends in the theater.

This is a quick-moving, quick-witted tale that's brimming with historical atmosphere.  You get a wonderful sense of what 18th-century London must have been like; and I have to say, despite all the talk of the lack of equal rights and political freedom, it sounds like a blast!  Cat is intelligent and funny, and in the course of the novel manages to interact with all sorts of interesting characters, from Covent Garden gang leaders--Billy--to ducal heirs and political cartoonists.  Even though the audience of the novel is definitely middle-grade, I never once felt my attention waning from the story, which is full of action if not of plot.

Speaking of the plot, that's really the only issue I had with the book.  The hidden diamond story wasn't much of one; and even though all the side adventures eventually led back around to it, I thought the conclusion was anti-climatic considering everything else that was going on (all of which was much more interesting).  This is a minor quibble, however; I was having too much fun reading the story to analyze it that much. 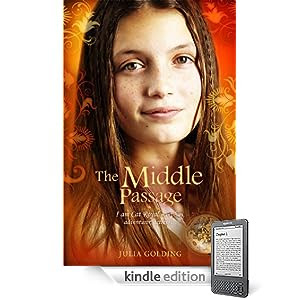 One thing I personally found very interesting was Billy Boil, the street tough who is Cat's mortal enemy.  I picked up The Diamond of Drury Lane after reading a free novella on my Kindle titled Middle Passage, a Cat Royal story that takes place two years after Diamond.  Let's just say Billy undergoes a dramatic transformation in the ensuing two years, and as of right now I have no idea how to reconcile the Billy of Middle Passage with the one in Diamond--although I think I can see inklings of what will happen.  Either way, I'm definitely intrigued and looking forward to reading the next Cat Royal book!

This is a very light, fun novel.  There is a lot of information and stuff going on, but at the same time it's one of those books where your mind can wander while you're reading it and you'll still be able to figure out what's going on.  I think this is a perfect read for kids in the 7-11 age range, and pretty damn entertaining for adults, as well.  Recommended!