A Gentleman in Love by Barbara Cartland 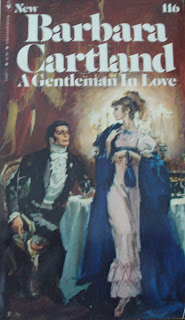 Sometimes I get strange ideas into my head.  For example, during the holidays I was talking to someone about romances, and mentioned Barbara Cartland used to put fake historical facts into her novels so she'd know who was being lazy and just copying her books (the answer was, of course, everyone).  While I was thinking about that, I realized I'd never read a Cartland novel, and resolved to correct this.  So off I went to paperbackswap.com to order a random Cartland novel.

Okay, I lied, that's not all I have to say.  This book was awful.  A perfect storm of bad writing, cliches, and info dumping, all tied together in a curiously flat tone.  If this book had a narrator, it'd be the guy from the Visine commercials.

The premise is pretty basic:  the Earl of HELLington (rake alert! rake alert!) decides he needs a wife, but is put off by the boring prospect of listening to women talk.  Then he meets a Milliner with a beautiful voice, and like Prince Erik with Ariel, falls in love.  Little does he know that the Milliner is actually the daughter of an earl living in reduced circumstances.  Maybe if he had known, he wouldn't have stalked her; but I think he probably still would have.

The plotting in this novel is actually fairly decent, but the methodology is just all wonky.  Cartland does this thing with her female characters where their speech is hampered by many dots between their words.  For example:  "Thank you . . . My Lord.  I am . . . of course . . . grateful."  No, she hasn't just run a marathon; she's conducting a business transaction.  And I don't mean that kind of business.  There's absolutely no reason for her to sound like she's about to pass out, so why is Cartland putting all those dots between her words?  After awhile, I realized it was because she's talking to a man and feels the need to space out her words like she's speaking to someone who doesn't know English.  Or maybe the dots are the literary equivalent of beeps and she's actually saying, "Thank you bleeping My Lord.  I am bleeping of course bleeping grateful."  Wait, that doesn't make sense.  ANYway, it was just odd.

I did like how Cartland put her characters in the social context of the time period--with Prinny and Byron and all the usual suspects--but as I said, the tone of the book is strangely dry.  It seems to suck all the entertainment value out of story.  I honestly don't think there's any reason to read Cartland with good romances out there.