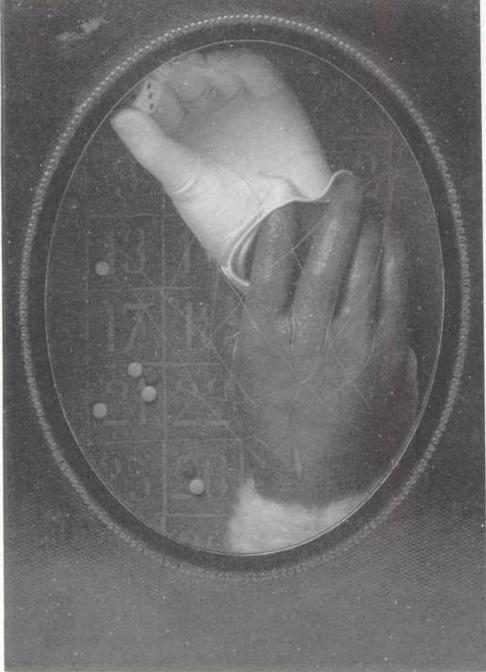 Have you ever noticed how gloves play a role in romance novels?  I was reading The Iron Duke by Meljean Brook the other day, and there's a great scene with the hero and heroine involving her glove (to hear me read the whole passage, click here):


Satin slid in a warm caress over her elbow, her forearm....  His expression changed as he continued to pull.  First registering surprise, as if he hadn't realized the glove extended past her wrist.  Then an emotion hard and sharp as the long glove slowly gave way.  It's white length finally dangled from his fingers, and to Mina seemed as intimate as if he held her stocking.... she felt exposed.  Stripped.

The surrealists believed an empty glove was an uncanny object because it had no life or anima where one expected to find it; it was like an empty piece of skin, without any soul.  A worn glove, however, is just the opposite:  the wearer gives it life, fills it with their own essence simply by slipping their hand inside.  It's a metaphor for the alchemical combination of male and female, and for the sexual act of creation.

A glove being worn also has a symbiotic relationship to the wearer.  In The Iron Duke, Trahaearn, the hero, is surprised by the nature of Mina's glove, just as he is surprised by her nature as well.  This is why taking off a glove is symbolically more sexual than putting it on--by taking off the heroine's glove, the hero inserts himself into her defenses.  In order to regain the power to animate, the heroine now needs the hero.  As Freud psychoanalyzed in one dream, the glove is basically analogous to the person who wears it, and the hero has taken possession of it.  That's not to say possession of a glove equates to possession of the heroine; but rather, the hero taking possession of the glove is a symbol of his desire (or vice-versa, although it doesn't usually work that way).

A visual demonstration of this idea is found in Objet by Valentine Hugo.  Valentine was the granddaughter of Victor Hugo, and had a huge crush on "the pope of surrealism," André Breton.  In Objet, she tried to attract his notice by engaging two gloves in a game of chance--i.e., love.  A love poem to Breton also accompanied the piece.  The tension in the piece comes from a central question--would the "male" glove (which looks remarkably similar to the description of Trahaearn's glove in The Iron Duke) succeed in breaching the female's defenses?  The answer was no--Breton was just not that into her.

With the main characters of these romance novels, however, the answer is a never-surprising yes.  Can you think of any other scenes where gloves play a symbolic role in novels or art?