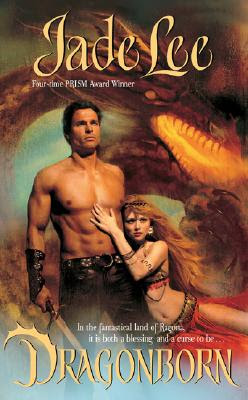 Category:  Cheetos for the brain

Oh, Jade Lee.  Why do you do this to me?  "Clutching cave"?  Men spending at least 150 pages fighting in the nude because they can't keep their "belly-horns" in their pants?  Sometimes I really wonder.  Yet I keep coming back because your books are just so freaking out there.

Kiril is a dragon hunter in the land of Ragona, which is ruled by an evil totalitarian Emperor named Dag Racho.  The Dag means that he controls a dragon--the only dragon left in the kingdom, thanks to Kiril.  But Kiril isn't killing dragons in the service of his emperor, whom he hates; he's killing them because he thinks they're evil.  He also has some plan to kill the Emperor that involves getting rid of all the other dragons, but how exactly this is going to work is never explained.

Meanwhile, there is one dragon egg left in the kingdom, and it's being incubated inside Natiya, a tavern dancer whose parents were murdered by the Emperor.  She plans to use her dragon to kill the Emperor, but then Kiril wanders into her tavern and, overcome by lust, they somehow fall in love.  All the while Kiril never notices that Natiya's carrying around a dragon egg, even though he's a dragon hunter.

This book is okay.  I never really got where Kiril was coming from in his attraction to Natiya, and actually expected it to be a complete ruse so he could capture the dragon egg.  The sexual imagery with the caves and dragons was out of control, and the politics side of it varied between nonsensical and boring (it's really hard to make fake politics even remotely interesting).  Not to mention the ending was completely ridiculous and there were lots of loose plot threads left hanging.

Yet the thing I really like about Jade Lee is that her books are so unconventional--she's not afraid to push the envelope or turn romance genre formulas upside down, and this book is no exception.  Who else would write a romance novel where the hero and heroine are separated for a good 100 pages right in the middle of the book?  Or where the hero fights at least three battles completely in the nude?  Plus, I have to say the sex scenes were really hot.

This isn't my favorite Jade Lee book by any means, but it wasn't as awful as I was expecting it to be, and provided a decent diversion.  I'm not going to say I recommend it, but hey, if you're interested go for it.