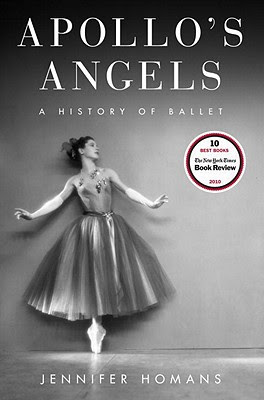 I've only read the first chapter of Apollo's Angels by Jennifer Homans, but I wanted to record my thoughts on it now because 1. I'm still waiting for it to come in at the library, and who knows how long that will take; and 2. this is a long-butt book and, let's face it, the chances me of me ever reading the whole thing are pretty minimal.

Despite that, however, I want to assure you that this book is really excellent.  It covers the cultural history of ballet from its inception in the courts of the French monarchy, to the modern-day.  The writing style isn't informal--it is a piece of scholarly research--but it is readable and not at all boring.

If you want to get a better idea of what this book is about, Homans appeared on Charlie Rose a couple of weeks ago and gave a great interview where she summarized the origins of ballet and how she traced its history.  If you're at all interested in ballet, I highly recommend you check out the video here:

Now, onto the book.  As I mentioned, it's well-written and as far as I can tell (considering I couldn't read the footnotes in my Kindle sample), well-researched.  Before I picked this book up, the only thing I really knew about ballet was that the Ballet Russe has a long tradition of being tied to the avant-garde--ballerinas from the Ballet Russe appeared onstage during Dada performances, for example.  So I knew ballet had broader cultural ties than just dance, but I had no idea how extensive.

As Homans touches on in the interview, the history of ballet is carried in the steps and bodies of the dancers themselves, passed on from teacher to student, and has very little in the way of textual history.  This undoubtedly contributes to its being overlooked by historians (including art historians), who are extremely book-centric.

What I love about this book so far is that it involves two things I'm interested in and recently posted about:  perfection and labyrinths (don't you just love it when there's synchronicity in your reading?).  The title, Apollo's Angels, refers to the ballet dancer's two main goals:  to be the perfect embodiment of dance, as the god Apollo is; and to defy gravity, like an angel (also another perfect spiritual being).  The first known ballets were in the courts of 15th-century French kings, and typically involved the king himself as a performer.  The dances were performed in the round by one or two people, the steps following a set of geometric patterns that may echo the forms of the Chartres labyrinth.

I didn't go into it much in my review of Inception, because it didn't seem pertinent, but dancing is an important part of the labyrinthine myth and practice.  Ariadne uses a dance to make her way through the labyrinth; there's also a dance Trojan warriors performed to commemorate their fallen soldiers that Virgil identified as the dance of the labyrinth.  It was described as a very complex tracing of geometric patterns, which the Trojans performed either on foot or on horseback (fun fact: the ancient word for labyrinth is the same word used for Troy in early manuscripts; Trojan soldiers also had labyrinths painted onto their shields).

For the French kings, meanwhile, labyrinths are in some way connected with legitimacy--I'm not sure exactly how.  Here's what I do know: one, every French Gothic cathedral that has or had a labyrinth was the site of the crowing of a French monarch, starting with Clovis I who was baptized at Rheims.  Two, at least one French monarch recorded in his diary that Ariadne's golden thread passed on to him the right to rule.  And three, when the Church started to campaign for the removal of the "pagan" labyrinths in the fourteenth century, the kings of France did their best to support their continued use.  Apollo's Angels suggests that with the intermarriage of the French monarchy and Italian nobility, they began adopting the labyrinthine dance as a symbol of their rulership and abandoned the cathedral labyrinths as being too conspicuous and problematic.  Eventually ballet became the symbol of the whole court, but most especially of the king; Louis XIV often depicted himself in ballet pose in official portraits and participated in a night-long ballet after his coronation, at the end of which he danced as Apollo.

Anyway, whatever random connections one teases out of it, this is a really good, interesting book.  If you have any interest at all in the subject, I mos def recommend it.