My Blood Approves by Amanda Hocking 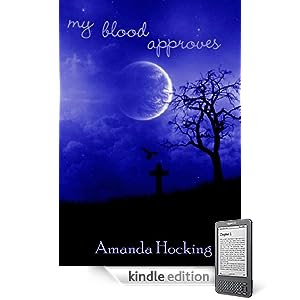 Category:  I read it so you don't have to.

Stereotypes:  Gay men like to decorate, paint nails, and cook; vampires live in familial packs; once you go vampire, you never go back; and so many more I could never list comprehensively.

Major likes:  The author has a very sarcastic voice. I suppose I'm kind of a sucker for vampire romances, too.

Major dislikes:  It was really stupid, there were a bazillion grammatical mistakes

While exploring the city with her friend, a shy high school sophomore named Alice is rescued from gang rape by a handsome vampire named Jack, who introduces her to his extremely attractive family and their fancy house and car collection.  She falls in love with him and his family, only to realize they like her blood more than her personality.

Sound familiar?  Imagine Twilight in Minneapolis, with Edward as a cheerful sk8tr and Jasper having lost Alice, and you get this book.  Granted, My Blood Approves isn't the worst Twilight rip-off I've read, but it is definitely derivative--I was going to list all the similarities, but the prospect was too daunting.  Just be prepared for a lot of obvious connections.

We're all familiar with Amanda Hocking as the amazing self-pub'ed author who sold a bazillion copies of her novels in one day.  Or a weekend, or whatever.  After reading My Blood Approves, I can understand this--for one, the books are dirt cheap.  I paid 99 cents for this one, which I think is less than I burn in gas when I go to the library.  For another, they are very easy to read and satisfying for that fix of romantic teenage angst we all need from time to time.  They're also emptily addicting in the way Christine Feehan's Carpathian novels used to be--you know the books are going to be utter crap, but you buy them and read them anyway just because you know exactly what you're going to get out of them.

If anything else, I learned the value of a good editor while reading this book.  Hocking is pretty good at editing her own work, but like everyone who self-edits, she missed a lot of obvious grammatical errors like "to" when it should have been "too," "then" instead of "than," etc.  There were also some pretty wonky sentences and whole paragraphs that didn't flow logically.  It teeters on the edge of being unreadable, but for the most part remains entertaining because of Hocking's sarcastic voice.  It's when the novel starts taking itself seriously that things go down hill.

Aside from questionable grammar, I was disturbed by several scenes in the book where Alice thinks casually about how she'd rather be dead than apart from Jack or his family (I'm not sure we're ever given last names).  I know teenagers tend to make overdramatic statements like this (I used to be one of those teenagers), but let's not encourage it, okay?  And no, sex is never worth being killed, especially metaphorical sex with an unemployed vampire who spends his entire night playing video games and watching movies.  Standards, people!  At least Edward did something constructive like stare at Bella while she slept.

I don't have much to say about the book beyond that.  If the characters had evolved over the course of the novel, I might feel differently, but as it was this seemed like a really fluffy book about which there's not much to think.  In fact, it seems almost anti-think.  And hey, we all need moments of anti-think, but this is like anti-think on heroine.  It did have moments that I enjoyed, and I can see how a teenage girl would consider it painfully romantic, but I would really rather just reread my own teenage version of it, The Vampire Diaries.