The Forbidden Rose by Joanna Bourne 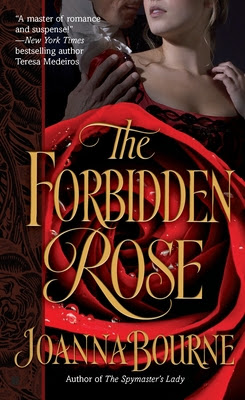 Stereotypes:  Spies can do anything.

Musical Notes:  "The Dog Days Are Over," Florence + The Machine

Movie Notes:  Scenes from The Count of Monte Cristo, especially in the baths, helped create the look of the book for me in my head.

The first review I ever posted on this blog was for Bourne's second novel, My Lord and Spymaster, which I loved.  The Forbidden Rose didn't live up to the excellence of ML&S, but it was still very good.

Marguerite is a former aristocrat in Robespierre-run France, whose chateau has just been looted and burned to the ground.  At first she seems typically delicate and survival-challenged, unable to even kill a rabbit for her dinner.  Then William Doyle arrives with his sidekick, Adrian Hawker, and takes charge.  William claims to be a French bookseller, and he convinces Marguerite it would be a good idea for him to escort her to Paris.  They both know the other is misrepresenting themselves, but that doesn't stop them from being attracted to each other.

I absolutely loved the setting of this book.  I have a weakness for Revolutionary France and Bourne's research is spot-on.  She really has a gift of making her readers feel as if they're witnessing a historical time period first-hand.  All the paranoia, uncertainty, and blood thirsty excitement of the era is palpable.  If you've ever read The Scarlet Pimpernel, this book has the same sense of tense adventure.

Unfortunately, it doesn't have the same sense of mystery and surprise, and I think that's one of the reasons why I just enjoyed it and didn't love it the same way I did ML&S.  It doesn't take more than a few dozen pages for us to know exactly what all the characters are up to.  Also--and I hate to say this--but the plot is starting to get formulaic.  In My Lord & Spymaster, we had a woman whose father was suspected of crimes while her love interest was determined to see him pay for said crimes; in The Forbidden Rose, we have a woman whose father is suspected of creating a list of men to be assassinated, and her love interest who is determined to kill him for doing it.  Bourne is a good enough writer that I'm sure she could have come up with something at least a little different than that to keep the plot going; one gets the sense that even she's bored with it, as the plot is mainly just glossed over in favor of more interesting adventures, such as exploring Paris' catacombs and chasing down street thugs.

Another stumbling block for me in enjoying this book was Marguerite.  Just as in ML&S, the story in Forbidden Rose hinges on the main character; but unlike ML&S, where I ADORED the main character, Marguerite drove me absolutely batty.  I honestly wanted to strangle her.  Any woman of good sense would have realized she was poisoned.  And she can send her friends into mortal danger but can't let her murderous cousin to be killed?  This does not make sense, just as her constant refusal to believe she and "Guillaume" can be together doesn't make sense.  I started to get the feeling Marguerite would walk into walls if someone wasn't keeping an eye on her.

Anyway, this is really a good book, but I think for me Bourne works best with characters from the London underworld--like Adrian Hawker, a pubescent pickpocket whom Doyle won in a card game.  He's a great character, with an inexplicable attachment to Doyle, and I can't wait until he gets his own book!

Overall I would recommend The Forbidden Rose, even though I still like My Lord & Spymaster and The Spymaster's Lady better.  Joanna Bourne is always worth your time, though.