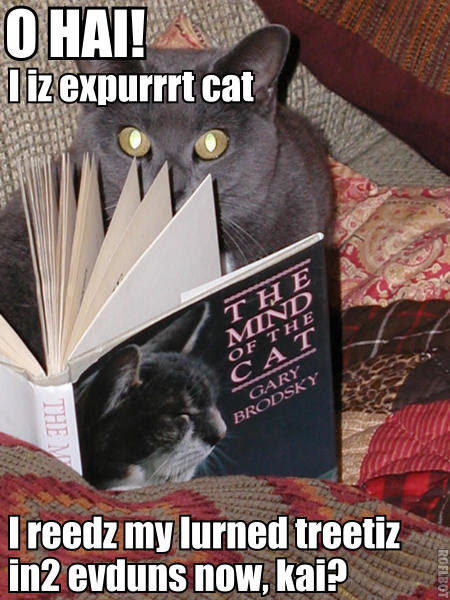 Today for Book Bloggers Appreciation Week, we are asked to write about how we find a place in the community. This can be tough, especially if your blog doesn't focus on one genre (like mine). There isn't really a group out there for self-professed eclectic book blogs, yanno? If there was, it would be called Cannot Make Up My Mind, or Rage of the Bibliophiles Who Are Very Easily Bored, and I definitely would have found that by now.

That being said, I definitely do feel like I'm part of the community of book bloggers, and it's due mainly to one thing: Twitter. I remember telling someone once that everything happens on Twitter, and it's totally true, especially if you're a blogger. It's not just general news things like finding out Osama Bin Laden was dead, or that there was an earthquake on the East Coast; people organize challenges and events in real time on Twitter that you only eventually see manifested on da blags. Just hearing about some cool event everyone's already signed up for? You probably weren't on Twitter when it was being put together (this has happened to me). Not to mention things like Armchair BEA, Dewey's 24-Hour Readathon, and Bloggiesta, all of which have twitter hashtags.

Twitter is great because you can hop on when you're feeling sociable and ignore it when you're not. And it's much easier to have an open discussion with people on twitter than on something like FaceBook. You can chat using IMs or the like, but that will be only with a select group--there's no chance of someone dropping in on your conversation and you making a new buddy (twubby?) like there is on twitter. 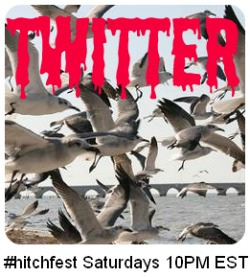 Within the very open world of twitter there are of course smaller, more nuclear groups. Example: book bloggers. Then there are various "events" where you find like-minded people you want to follow. For example, Jane from Dear Author (@jane_l) used to do #romfail on twitter every Friday where she'd make fun of romance novels. That was highly entertaining. And for about the last six months, I've watched Hitchcock movies with other bloggers under the #hitchfest hashtag every week. There are some weeks when #hitchfest (and the corresponding #alcoholfest) is the only thing I look forward to all week. It's really fun and has introduced me to a bunch of bloggers I didn't know much about before now.*

It started out with me writing a paper on Hitchcock and tweeting that I had a stack o'his movies to watch. A first it included @lithousewife, @biblioeva, @picky_girl, @unfnshdprsn, and @justaddbooks; and over time has involved @ChrisBookarama, @JoLynnF, @braincandybr, @Col_Reads, @elabkwrm, @buckeyegirl31, @lifeand100books and her hubby @ttotheodd, @pussreboots, @webereading, and @evangelineh (I'm sure I missed someone in there, so just let me know if I did). It's nice to know I have my crew on twitter to discuss olde timey movies with, or books or the stupidity of reality TV shows.

So if there's one takaway from this it's: get onto twitter. And if there's another takeaway point, it's that community doesn't just happen; you get out what you put into it. Things like #hitchfest (or BBAW, or anything of the other book blogging events you run across), happen because people--more than one--are willing to put time and energy into it and make it a priority. So if you're struggling to feel like part of a community, get involved in something! Put the effort into it to make it important to you. And it will be.