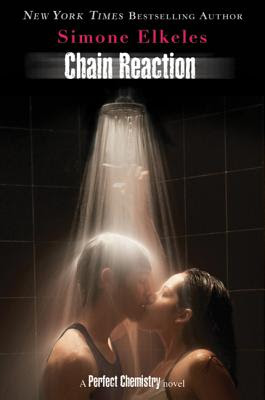 In the third excuse to rewrite Perfect Chemistry Perfect Chemistry novel, Elkeles introduces us (or rather, reintroduces us) to another character I don't remember from the original book, Luis. Luis is the baby of the family and wants to be an astronomical engineer--or something like that--but also likes to take risks! I know this because he was climbing a boulder without a safety harness and got bitten by a not-a-rattle-snake. Oh that risky risk-taker! Despite his proclivity to act like every other teenage boy I've ever known, Luis still manages to get all A's in school and be a star on the soccer and swim team, and a bunch of other stuff that guarantees he's going to go to a great university on scholarships and achieve his lofty dreams. But then his mom decides to move back to their house in the ghetto of Fairfield, Illinois, which is gang territory, and--spoiler alert!--Luis gets involved with his old buddies, who also happen to be gang members! And he becomes embroiled in the gang! Oh, Luis why???? Where did it all go wrong?!? Meanwhile, Luis is falling in love with a girl named Nikki, who also likes to take risks. I know that because she had sex with her bf without a condom, and then got pregnant.

I really like Simone Elkeles--even when I don't love her novels, I usually at least enjoy her writing style. Unfortunately, I don't think her writing style is very evident in this book, and if we're being honest I kind of hated it.

It all started with the prologue. Have I mentioned I hate prologues? YES. That link is proof that I have. Having a prologue in a book is one thing--it certainly doesn't create a good first impression, but usually I just skip it and go along my merry reading way--but having a prologue and not even having the common courtesy to label it as such?! THE RAGE, IT BURNS.

Aside from the prologue, though, this felt like a giant phone-in sesh. The characters are pretty dull: Luis is way too Everyman to have any personality; and I'm not sure what his girlfriend Nikki is supposed to be, but I'm guessing it wasn't the pathetic bitch she came off as. Not to mention the characters' motivations--and I use that word loosely--were ridiculously transparent. Take this paragraph from the prologue:


I vow to forget about Marco and forget about our baby who never had a chance. Luis Fuentes reminded me that I'm still vulnerable. If I'm emotionally unavailable, then I don't have to worry about ever getting hurt. When this nightmare is over... Nikki Cruz will no longer be vulnerable.

Gee, thanks for spelling that out for us! I might not have caught onto the emotional subtleties of your neurosis without it. Or how about this soliloquy from a secondary character. You see, Luis...


That day I promised myself I'd find a way out... and when I did, I became a cop so I could stop other kids from making the same mistakes me and my friends did.

Aw, hello after school special! My point is, there was a lot of telling in this book and not a lot of showing. I get the sense Elkeles wanted to tell a particular type of story here, but she couldn't really do it with the characters she decided to write about, so a lot of the emotional stuff in the book feels really manufactured, including the "romance" between Luis and Nikki.

There's always a certain amount of silliness in these novels, but it doesn't bother me because I usually love the characters and the hero and heroine have great chemistry. Here I actively disliked one of the characters, didn't really care about the other one, and there was no believable attraction between them, which made for a pretty boring book. And don't even get me started on the ridiculous ending.

Obviously I was pretty disappointed in this novel, but at least the series is finally over and we can all move on with our lives.