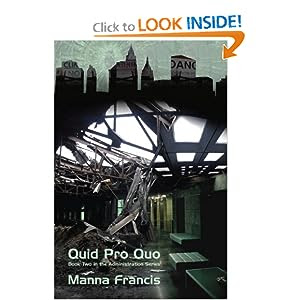 Quid pro quo, def. (From the Latin meaning "what for what") indicates a more-or-less equal exchange or substitution of goods or services.


Toreth and Warrick, having bonded over certain secrets related to the Sim-Tech case in Mind Fuck, are continuing their not-a-relationship. But even though it's "just fucking," their lives are slowly entangling and they start exchanging more than just bodily fluids. Addresses, gifts, friends, bouts of jealousy--for two people who have no interest in being in a relationship with one another, they certainly do a pretty good imitation of it.

Unlike the first book in this series, this novel is more or less all about Toreth and Warrick's relationship. Which in one respect is totally fine with me, since I thought the plot to Mind Fuck was boring anyway. But on the other hand, I kind of missed reading a book with a plot (I know, I know), not to mention seeing Toreth at work and catching up on all the office gossip and politics at I&I. That element's still there, just not very much.

To be honest, I also felt like Toreth was occasionally emasculated by removing him from the context of I&I, especially in the "Family" chapter; but then Warrick has moments when he's emasculated as well. He's definitely the Betty Draper in this relationship, but more because the concept of monogamy is as foreign to Toreth as it is to Don Draper. There's a give-and-take between Warrick and Toreth that makes their relationship one of equals (I suppose that's where the title came from). Although the book is very clear that socially and economically, Warrick is a class (or two or three) above Toreth, you've got the whole BDSM thing going on, where Toreth is definitely the dominant, so it's weirdly balanced.

I read Quid Pro Quo on Manna Francis' website, where it's organized into short stories. Mind Fuck had a vaguely yaoi/manga feel to it, but because QPQ is so episodic, it definitely feels like a prose version of a manga. Which I love! The stories are loosely connected, most especially by theme, but take place with unknown gaps of time between them and can stand on their own. My favorite was "Pancakes," partly because I love pancakes (haha--but seriously, I do love pancakes), and partly because that seemed like the major turning point in the book where both characters realize they're together because of more than just sex. It was really well-done and a great piece of writing.

Like MF, Quid Pro Quo has some faults, but overall it's well-written and entertaining. Definitely addicting and worth checking out if you read and enjoyed the first book in the series!