Book Review: PERFUME, THE STORY OF A MURDERER by Patrick Süskind 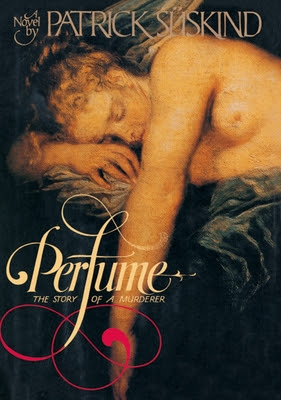 Once upon a time in France, Jean-Baptiste Grenouille is born into a harsh world. Forget about love and human kindness; everyone is out for themselves. Especially when it comes to Grenouille, because he has no soul--or so people believe, because he has no scent. He doesn't smell bad, like the fish market he's born in, or good, like a baby generally does--he doesn't smell of anything. Ergo, he freaks people out. As far as they're concerned, he shouldn't even exist. One of his nursemaids calls him a vampire, and this is more accurate than she knows, because once Grenouille realizes he can distill people's scents, he decides to steal them for himself. And by people I of course mean beautiful young virgins.

This novel wasn't exactly pleasant to read, but it had its moments. The first fifty pages or so are pretty boring, because Grenouille's just an innocent little serial killer and doesn't do much except sniff around woodpiles and whatnot. There's also a slow part in the middle where J-BG lives in a cave for seven years and entertains himself remembering all the smells he's smelled (yeah, I skimmed through that part). Other than that, though, the book's actually pretty interesting, especially when Grenouille is learning how to become a perfumer; and the very end, which nearly punches you in the face with its existentialism, really makes the entire novel worth it.

One thing that did surprise me was the subtext. I definitely don't think every work of fiction emerging from Germany in the last 60 years has something to do with WWII, but in the instance of this specific book, there's a case to be made. Like Adolph Hitler, Grenouille is seemingly unkillable, surviving abandonment by his mother, anthrax, some sort of black plague episode, and hypothermia, just to name a few. He's completely asexual and not a sensuous person at all--as in, he doesn't care about food or beauty or being comfortable; he only cares about scent. When he does kill, it's not because it brings him a personal sense of satisfaction, it's just a means to an end--gaining these girls' scent so that people will love him and do whatever he wants them to. The killings aren't acts of passion or even hate, but are efficient, almost mechanized, so that Grenouille can get what he really wants: control and power. "If he wanted, he could be feted in Paris... or could walk out to Versailles and have the king kiss his feet; write the pope a perfumed letter and be revealed as the new Messiah...."

The ten thousand men and women, children and patriarchs assembled there... grew weak as young maidens who have succumbed to the charms of a lover. They were overcome by a powerful sense of goodwill, of tenderness, of crazy, childish infatuation, yes, God help them, of love for this little homicidal man.... These people were now pure liquid, their spirits and minds were melted; nothing was left but an amorphous fluid, and all they could feel was their hearts floating and sloshing about within them, and they laid those hearts, each man, each woman, in the hands of the little man... for better or worse. They loved him.

After this massive incident of Group Think, which results in Grenouille's escape, the town of Grasse tries its best to mind-bleach the entire episode. They convict an innocent man of the killings, the records pertaining to "G" are lost, and no one speaks of it again. Life forcibly moves on. One might say Grasse has lost its innocence, but it would be more correct to say that the people of Grasse lost their perception of their own superiority. Grenouille's perfume of beauty, love, and purity reached these people and they all reacted with their basest lusts and greediness, behaving like "human beasts." Because of the enchantment of having their desires satiated, they let a murderer go free--not only that, but worshiped him. It's not just the knowledge that they're no better than Grenouille, but how thin their veil of morality and humanity is that keeps the citizenry from looking each other in the eye.

This is the type of novel where everyone is to blame. Even the people who "save the world" from Grenouille (at his own design) do so in the most disgusting and inhumane method imaginable, then congratulate themselves afterward. The narrator believes Grenouille is a terrible person, yes, but he's a terrible person because the world, totally selfish and greedy, made him that way. Aside from his superpowers--unkillable, super-smell, etc.--there really isn't much difference between Grenouille and any of the other characters in this novel. Does Grenouille really have no soul? Of course not; he desires the same thing we all do, love. It's when he realizes no one will ever love him--or vice versa--that he gives up.

If this story is a metaphor for what happened to Germany in WWII, then it's only in a more abstract sense. But I don't think it's as cynical as it first appears; if anything, Süskind is making an argument for tolerance and kindness and the Enlightenment values of freedom, equality, brotherhood, etc. (except for when it comes to women; if I thought the movie was misogynistic, the book is a lot worse). So while this may not be my favorite book ever, I do think it was worth reading. There are Ideas and there is History, and it reads amazingly fast in the non-boring parts (which is most of the novel). On more than a few levels this book is deeply disturbing, but then what else would one expect from a novel about a serial killer?

Musical notes: "I Think Ur a Contra," by Vampire Weekend