Audiobooks are the Nom 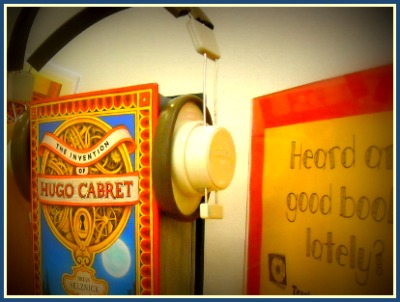 Blogging has definitely influenced my reading, but the biggest change that comes directly from blogging is my new obsession: audiobooks.

I've never had much to do with audiobooks. Colorado doesn't have an audiobook culture like, say, Utah (I'd never seen more audiobooks in my life than when I was in Utah) and my parents never listen to them. But at the same time, when I read, I "hear" the words in my head. Also, odd confession: I've always wished there was a button on the remote that worked like the mute button, but took away the picture instead of the sound so that I could just listen to the TV instead of watching it. So in way listening to audiobooks should be second-nature to me.

Nevertheless, I resisted audiobooks because I thought it would be too hard to concentrate on them. I did listen to Harry Potter on audio, but only after I'd already read them--that way if I got distracted, I wouldn't be lost. But then I finished Harry Potter and I really wanted to listen to another audiobook on a car trip, which was when I tried out Wicked Lovely by Melissa Marr. Amazing audiobook! It was so good I kept listening even after the trip was finished.

Because of that experience, I've listened to several more audiobooks (most by Melissa Marr), and they've definitely grown on me. I find myself to be more interactive with audiobooks--laughing or reacting more emotionally than I would if I was just reading. In a way, the performance aspect of audiobooks make them more fun for me, too.

Plus, you can listen to audiobooks while doing other things! I can't listen to them while I'm writing, because I can only concentrate on one set of words at a time, but definitely while cleaning or tweeting or doing something pointless like editing a video on the computer. I still sometimes get a bit lost, but it doesn't bother me that much. I think audiobooks are easier to pick up and require a bit less concentration, perhaps because the narrator does some of the work for you by filling in the tone of the writing and the emotions of the characters. Even if you don't know exactly what's going on, you can pick up on the context fairly easily.

Not to mention the fact that I really think books are supposed to be read aloud. Writing, at its essence, is just a recording of what was or should or will be said aloud, kind of like musical notes.

Anyway, that's my new thing. Do you have any audiobooks you'd recommend?