Book Review: THE MYSTERY OF THE YELLOW ROOM by Gaston Leroux 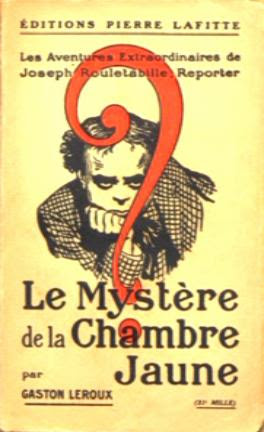 After a woman is mysteriously attacked in her own bedroom, with the door still locked from the inside, the police are baffled. Fortunately, Joseph Rouletabille, the most famous investigative journalist in the world, is on hand to solve the case.

The Phantom of the Opera is one of my favorite books of all times, but for some reason I never even wondered what other books Gaston Leroux might have written. Or if I did wonder, I forgot. But! When I saw a review for The Mystery of the Yellow Room and its sequel, The Perfume of the Lady in Black, at Cynical Optimism, I knew I had to give it try.

This is the first "locked room" mystery ever written. You can still find variations on this plot today--The Mentalist, for example, had an episode based on this idea. The linchpin question is, how did the murderer escape the room? In this case, the mystery is further complicated by the fact that the murderer doesn't escape once, but several times, something the police don't know and that Rouletabille has to figure out.

As far as the mystery goes, this book is excellent. I don't think I've ever encountered a more successful red herring in my life (perhaps Leroux invented red herrings, as well?). At first the story seems relatively straight-forward (aside from the problem of the room, of course), but it keeps twisting and twisting until the end when Rouletabille reveals the killer, which is the biggest twist of all--but also left me thinking, "OH DUH." As a reader, one definitely has all the information to solve the case, but Leroux is so skillful at distracting one with delicious Victorian drama that one doesn't realize it what the pertinent clues were until later.

I also loved the detective, Rouletabille. He's only eighteen, so he has wild mood swings, is very enthusiastic about everything, and is freakishly smart. His origin story is just bizarre, with him discovering an important piece of evidence when he was eight which led to a job at a newspaper. Apparently there's a whole series of books starring Rouletabille, one of which is the first espionage novel ever written.

That being said, my enjoyment of this book was tempered by the fact that I listened to it in an audiobook format from Librivox. Since the narrators for Librivox are all volunteers, it can be pretty hit-or-miss, and this novel had seven or eight different narrators, some of whom were pretty good and some who could use a little work. Hence I'm still really confused about some things, like who is telling the story? It's not Rouletabille, it's some other journalist, but I'm not sure who. Are we supposed to assume it's Leroux? Also, who is the Lady In Black? Still don't know, and a little freaked out by the fact that Rouletabille kept going on and on about her perfume, as I was reading Perfume: The Story of a Murderer at the same time. Also, for the first quarter of this book I thought the woman in the yellow room, Mlle. Stangerson, was dead; so you can imagine how confused I was when she started giving her statement to the police (?!). That's when I knew this audiobook wasn't working out very well. I'd like to reread the novel in actual text format before I move on to the next Rouletabille book, which I definitely plan to do.

If you enjoy Phantom of the Opera or turn-of-the-century mysteries, I definitely recommend you give The Mystery of the Yellow Room a try. Rouletabille may not be as awesome as Eric (who is?), but he's nevertheless a pretty great character, definitely right up there with other classic detectives like Sherlock Holmes and Poirot. And this novel has the same great mix of fun and suspense as Phantom.