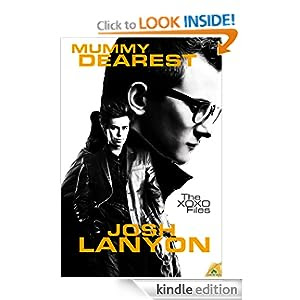 Drew's boyfriend/boss (awwwkward) tells him he needs to publish more if he wants to get tenure, which is how Drew finds himself in Walsh, Wyoming, trying to inspect the mummy of Princess Merneith on the same day Frasier Fortune, host of the TV show, The Mysterious, is filming a segment about the mummy's supposed curse. Sparks fly between Frasier and Drew on their first meeting--the sparks of annoyance and dislike, since Frasier is refusing to let Drew inspect the mummy. But after the two compromise, Frasier changes his mind about Drew and vice versa, and then they solve the mystery of the walking mummy.

This is a fun book, although I would have liked a little more from it. It's unclear exactly what Drew teaches (what is with Lanyon and academic characters recently, anyway?), and I felt certain elements of the plot--well, really all of the plot--were not fleshed out. But whatever weaknesses the novel might have, this was a sure bet for me from the start because:

After starting this novella, I realized it was something Colette from A Buckeye Girl Reads would really enjoy, so I loaned it to her. It was her first m/m romance! (I may not have initially disclosed this.) Below is our discussion about the book:

What did you think of your first m/m romance?


Colette: I was pleasantly surprised by my first m/m. I don't know what I was expecting, because this was just like a normal romance novella-except the romance was between two guys. I will definitely be reading more from this genre.

How does this book compare with a traditional romance?


Tasha: Well, first of all, I'm not sure this is a "romance" in the traditional sense because there's no HEA. It's more of a hook-up. But one of the things I liked, especially after reading Instant Attraction, was that there wasn't any of this bullshit pretending-we're-not-attracted-to-someone-for-no-good-reason crap that I hate. Apparently male characters are allowed to act logically and hook-up with people if they feel like it and women aren't.

Colette: I would say this was a like a traditional romance because all though there wasn't the pretending not to like you part, Drew did fight his feelings for Noah-he just didn't fight them as long as they do in traditional romances. It's also similar because there was one character who thought the other was better then they were and that's why they weren't getting together. But again, unlike in traditional romances, that was wrapped up much faster then it would have been otherwise.

Tasha: Well, Drew did resist hooking up with Frasier because he was already in a relationship, which is reasonable. But almost as soon as he broke up with Noah he got together with Frasier! Like literally three minutes afterward.

What did you think of Frasier Fortune?

Colette: I liked him a lot! He made me laugh out loud, and reminded me a lot of Josh Gates, my favorite reality tv boyfriend who chases myths like Frasier does.

Was there anything that surprised you about the novel?


Tasha: There were a lot of and-the-plot-thickens! moments, but I felt like they didn't pay off in the end because the story wasn't long enough. I liked how olde timey movies were integrated into the story and really wanted to read more about that. I also thought the thing about Princess Merneith and homosexuality in Ancient Egypt was really interesting. I'm surprised there isn't more information about that!

Colette: I really liked the twists and turns it took to get to the end, and I also liked learning about stuff about Ancient Egypt that I didn't know. I thought the ending was a little abrupt, and would have like more conclusion with Drew and Frasier, but I'm hoping this means that we'll see more of these two in the future.

How would you characterize this book as far as tone, theme, etc.?


Tasha: This is definitely a light and fun novel. As for theme I think Drew definitely goes through a journey where he has to decide whether what he perceives is authentic and what's "real." Like with the fight with Noah, for example.

Colette: I would characterize the tone of Mummy Dearest as humorous, and the basic theme was mystery, with Drew trying to figure out just who he was.

Was there anything that bothered or annoyed you?


Tasha: You know there's usually some detail that bugs me. In this one I was really bothered that they called Walsh "Matthew Shepard territory." That seemed like a rather broad generalization. It also bothered me that Noah wasn't attached to his phone. I know he's an old fuddy-duddy, but every single department chair I know is glued to their smartphone.

Colette: I think what annoyed me the most didn't have to do with the actual story, but that 20% of the book was for promoting his other books. I can understand doing that for the last 2-3% of the book, but a whole 20%? I always feel a bit cheated with ebooks when that happens.

Tasha: That annoyed me, as well. I thought I had way more in the book to read and then all of a sudden it just ended! Maybe that's why I keep harping about the length with this one...

How does this compare to other books Josh Lanyon has written?


Tasha: As far as his shorter, lighter mysteries are concerned, this was pretty comparable. I remember liking the characters better in The Dickens With Love, but it's quite similar to that. I think his longer, more serious novels, like Fair Game and Snowball In Hell, are better just because there's more character and plot development. I'll say this for Lanyon, though, he always writes very unique characters.

If you want quick, fun, Halloween-related read this week, I'd definitely recommend this novella. And to get you in the right frame of mind, here's the trailer of the The Mummy with Boris Karloff: