What Would Jane Austen Do? 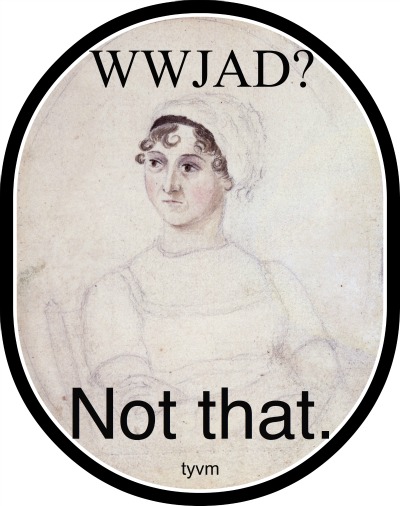 Maybe I'm more of a Janeite than I realized, because whenever something in modern literature starts to annoy me, I ask myself, "What if Jane Austen were living today? How would [insert annoying trend here] affect her books?"

Take series, for example. It's getting out of control, people! Do stand-alone books even exist anymore?! Is there any reason beyond trying to make me buy more books that you've decided to stretch out this story over fourteen 500-page volumes? I think we both know there isn't.

As I was telling Colette from A Buckeye Girl Reads the other night, if Pride & Prejudice was written today, it'd be a 10-book series and would go something like this:

In case you didn't notice, these are all basically the same book! And just think, if Jane Austen had spent her time rewriting P&P in these progressively more terrible books, then she never would have written Emma, or Mansfield Park, or Persuasion. Her entire legacy would be ONE great novel and a bunch of sad-going-on-pathetic imitations. Yes, the one great novel is enough, but how many series today have one great book in them?

Out of curiosity, are there any other characters we want to hook up from P&P?