From Byronic to Sparkly 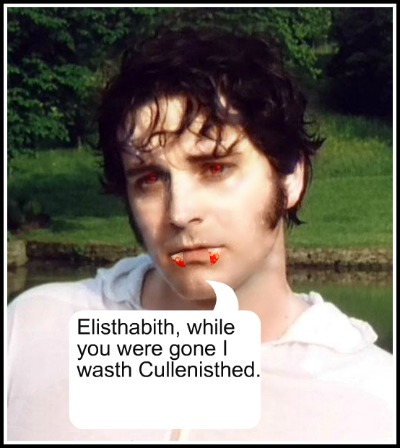 A few weeks ago, a post titled From Byronic to Moronic popped up on my radar because a few people thought I might be interested in it. The author, Christine Spines, draws a deep and meaningful connection between Stephenie Meyer and her production of Austenland. To wit: she thinks Twihards and Janeites are all crazy people.

The sanity of these two groups aside, several of Spines' statements in this article makes me think she has never actually read any of these books--most especially her conclusion that women find the characters she gives as examples (which are all over the map, by the way--from Mr. Darcy to Heathcliffe to Jay Gatsby; why not just say every male character evar?) is that they're... wait for it... bad boys!

Mmkay. Bad boys ARE quite appealing, I think we can all agree, but Mr. Darcy and the Sparklepire? I'm not seeing it. Even Spines argues against herself, saying,


Above all, what Darcy, Wentworth, Heathcliff, Rochester—and to some degree [sorry, I just have to intervene here--some degree? This describes Cullen more accurately than any of the other characters she lists here! And Heathcliffe and Rochester really shouldn't be grouped with any of these other guys, especially in this context. Okay, back to the quote], Edward Cullen—all share is a powerful strain of high-minded morality and a stubborn unwillingness to be conniving or mercenary enough to follow (or flout) the social codes of conduct necessary to unite them with the plucky heroine they so desire.

Wait, so bad boys have high-minded morality and are unwilling to break social codes of conduct now? I think you're searching for the Wickham and Willoughby characters in Austen's novels there, who are most definitely not the romantic leads. Has Spines even watched the movies, one wonders?

In any case, there's no need to scratch our heads over this anymore, as I have found the answer to Spines' question of why heroes like Edward Cullen and Darcy and all the rest have this "powerful strain of high-minded morality" and are "torment[ed] over their own imperfect nature." I discovered this long-searched for key through a pioneering research method I developed called LET ME GOOGLE THAT FOR YOU.

You see, the roots of romance novels can be found in chivalric romances such as Le Morte d'Arthur or Sir Gawain and the Green Knight, wherein a knight errant goes on a quest to prove his worthiness, which may or may not include courtly love. These medieval romances were eventually reworked into several literary genres, including Gothic novels of the 18th century and "novels of education," which focus on the character development of the protagonists and were popular among romantic artists like Goethe. Both of these types of novels influenced Jane Austen and continue to hold strong sway over our definitions of literary romance.

In other words, the thing that Darcy, Cullenpire, and even Heathcliffe and Rochester all have in common is that they're knight errants, NOT that "They are the ne plus ultra female fantasy embodiment of bad boy and marriage material," whatever that's supposed to mean. Hence the morality, code of conduct, and concern over their imperfect nature.

Everyone's looking for a knight in shining armor, yo.
at 1:06 AM