Weekend Cooking: WHAT THE WORLD EATS by Faith D'Aluisio and Peter Menzel 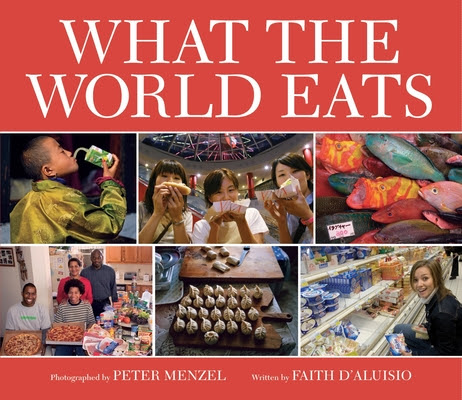 If there's a book just asking to be made into the PBS version of No Reservations, it's this one. Peter Menzel and Faith D'Aluisio go around the world and take photos of families with a typical week's worth of food, comparing diets, prices, and a bit about the food culture of the country.

Any foodie worth their salt is interested in what other cultures consider staple foods, so this book is really fascinating, just as I expected it to be when I read Natasha's review of it at 1330v. I was surprised at what parts I found most interesting, however. The variation in what a family spends on food in a single week, for example, can be really mind-boggling. One family in Bhutan feeds 13 people with a little over $5 USD a week; a family of four in France, meanwhile, spends close to $420 USD a week on food! Of course, the French shopping trip included things like wine, cheese, croissants, sausage, and other things I personally wouldn't want to do without. Big spenders on food also have a lot more variety in what they eat. And if there's one thing I've learned from this book, it's that meat is a big expense. Nearly a fourth of the French family's budget was spent on meat, while the Bhutan family only ever ate eggs and a small amount of dried fish for protein. In fact, almost all of the big-budget weekly meals devoted the majority of their money to meat.

I also loved the addition of the family members' favorite foods, just because something like that is always so personal and random. People tend to go either really broad ("everything") or really specific ("spaghetti carbonara"). Unfortunately, we don't get that information for every family, so that was a bit disappointing. The recipes were another odd addition, as the probability of me making something with ingredients I've even heard of, let alone can find, is pretty small.

On an ideological level, I had some issues. This book can get very preachy and the authors definitely have a point of view, one in which McDonald's and processed food is evol. No, I don't eat at McD's; and yes, I am one of those people that's all about fresh and seasonal food, but that's partly because my family is German and I was raised that way.

There's a reason processing and preservatives exist--because eating McDonald's is better than starving. Since the start of civilization, the fight against starvation has been one that requires a way to preserve food for a long time, and nowadays we're pretty good at it. Maybe it's not as healthy as eating everything fresh, but unless we're all going back to being hunter-gatherers (and I can tell you right now I'm not), that's reality. The authors rightly point out that there's a cruelly ironic dichotomy between the fight against obesity in the US and the fight against the hunger that exists in other parts of the world; but they seem more concerned with the former when one would think the latter is more important.

There's also a colonial tone of romanticizing the "primitive life" of non-Western cultures here, an "Oh, look how we're destroying the simple lives and eating habits of these people with our wickedly advanced grocery stores and fast food restaurants" message that I found to be annoying. And if Menzel and D'Aluisio think that this book doesn't invite generalizations (as they say in the introduction), they're deluding themselves; it's titled WHAT THE WORLD EATS, not What a Select Group of People Eats. Overall, though, I think this book is worth at least paging through if you're interested in food and culture. It contains a lot of good information, and the photographs are very interesting (Menzel and D'Aluisio should consider designing supermarket window displays). Plus this book inspired me to compose my own mini-photographic essay! Here is what I eat in a day:

I'm not a big breakfast person and usually just have coffee with cream and peanut butter toast.

Not a big lunch person, either. Today it was chicken enchiladas with what I have to say were some pretty sub-standard tortillas and Spanish rice.

Dinner's my big meal. This chicken piccata with noodles and asparagus tips looks really unappetizing, but it tasted all right. I literally ate everything on this plate.

I usually have some wine late at night. Also another snack, but tonight I wasn't that hungry.

Total cost: No idea, that would require way too much math. I do think we spend between $150-200 a week on food for four people, though.

To find out more about Menzel and D'Aluisio's current project, check out this lecture Menzel gave at EG4:


Mini-survey time! About how much does your household spend on food every week? What's your favorite food?