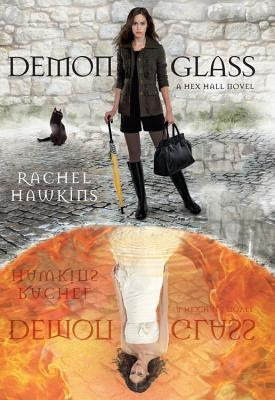 After a challenging first year at Hex Hall, Sophie Mercer is going to England to spend the summer with her father and have her powers permanently Removed. But seeing as she's staying with the rest of the Council in the same house where her grandmother was turned into a demon, chances are good that Sophie will stumble upon some dangerous secrets.

I read Hex Hall, the first book in this series, when it came out, and here's what I remembered from it: Hex Hall is a high school. For... witches? Otherwise, my recall was embarrassingly blank. I remembered liking Hex Hall but thinking it was fairly predictable. Nevertheless, I heard a lot of good stuff about Demonglass, so I decided to keep on going with the series, and I'm definitely glad I did. Demonglass develops the story in new directions and is a big improvement from the first novel.

One of the things I really liked about this book was the "love triangle" between Sophie, Cam, and Archer (don't pretend you didn't know there wouldn't be a love triangle). Sophie knows both Cam and Archer from Hex Hall, but for various reasons, Archer is extremely unsuitable as boyfriend material--so, naturally, he's the one she's attracted to. Cam is Hex Hall's adorable groundskeeper who likes taking his shirt off (*rowl*), and the guy Sophie's best friend is rooting for. Sophie should really spend more time listening to her bestie. I love Cam so hard... but Archer is pretty awesome, too. Gah! Such a difficult decision!

As for what I didn't like, Sophie's relationship with her dad didn't make a lot of sense to me. She says herself that the only contact she's ever had with him during the entire course of her life are birthday cards obviously picked out by his secretary and tersely signed, "Your Father." WOW. Given that, I would think there'd be way more tension in that relationship than there was, especially with his super-sketchy behavior and the fact that he never explains why he's ignored her existence for the last seventeen years. It also bothered me when Sophie would think something along the lines of, "Oh, I'm seventeen now, so I have to respond to this like an adult." How realistic. Yes, by all means, consciously decide to deal with something as an adult, despite the fact that by our cultural and legal standards you are not.

Aside from that, this was a very quick, fun book, on the edge of being unputdownable (unfortunately I had to put it down because I have job. Stupid job). Outside the walls of Hex Hall, the books' world of magic feels much broader and more developed, and Hawkins really ups the ante for the main characters in this volume. The last fifty pages are incredibly intense, and the ending was a cliffhanger that left me wanting the third book in the series like NOW. I also love Sophie's humor and snark, which keeps the book feeling light even with all the serious events happening around her. I definitely recommend trying this series or the second book if you haven't already!

Musical notes: "Born This Way" by Lady Gaga, mainly because Sophie mentions she was "born this way" (i.e., with demon powers) several times during the course of the novel.