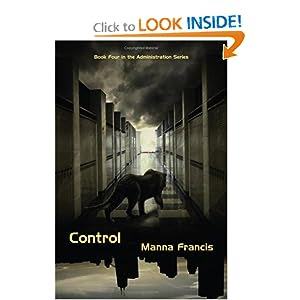 In the fourth Administration series novel, Toreth and Warrick both face issues of control--or lack thereof--in their lives. For the most part these short stories address PTB's (for those of you who are not Buffy fans, that's the Powers That Be--the dominating forces of government and corporates that the average citizen in this dystopian world has very little protection against), but they also show Toreth and Warrick figuring out who is in control of their relationship, and which of the two men can better control himself.

Aside from the first story, I didn't feel like there was a lot of character development happening in this volume. At one point Toreth grumbles that he's bored, and I can't help but wonder if Francis wasn't thinking that herself while writing this. I hope that's not the case, but it definitely feels like there's not as much thought put into this book as there was in the other three. It seems like Warrick just gets more accommodating and Toreth gets more possessive, and everyone (except Annoying Dilly) is hunky-dory with that. That didn't bother me in the previous books because 1. I wanted Toreth and Warrick to stay together, and 2. I understood why Warrick put up with Toreth and vice versa. But in this book I had more and more trouble sympathizing with either of them or understanding why they're still together.

One of the more interesting revelations in this book was Toreth's attitude toward Warrick's job. It's been obvious since the first book that Warrick has major issues with Toreth working for I&I, for very good reasons as we find out; but in this novel it becomes obvious Toreth hates corporates as much as Warrick hates the Administration. Really both corporates and the Administration can get away with whatever they want, so there's not much difference between the two, other than corporates have more money.

Overall this book was okay, but I hope it's just an aberration in the series and the next novel is more interesting.