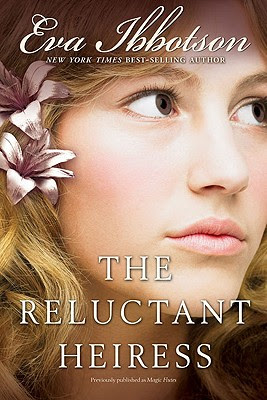 Guy Farne, an English businessman, has bought the castle of Pfaffenstein in WWI-torn Austria to impress his toffee-nosed fiance. But while waiting for her to arrive, he falls for Tessa, the Princess of Pfaffenstein, who is the complete opposite of Guy's fiance in almost every way. Will these two crazy kids get together?

This is a very sweet, romantic novel that feels like a fairy tale adaptation even though it doesn't follow any particular fairy tale. It's researched out the wazoo as far as music--and opera in particular--in the city of Vienna is concerned, and has great characters and great writing. Ibbotson's writing style is fantastic; this isn't the short, straight-forward tone of voice that one might expect from someone like Ernest Hemingway, for instance. It's very lyrical and full of references to art and music that's perfect for this type of story. Take this sentence, for example: "...eyes the color of a Stradivarius, eyes which might have been put in by the thumb of Titian himself when he grew too old for detail and was concerned only with the extreme condition of the human soul." Don't you know exactly what Tessa's eyes look like now?

I also loved the characters in this book, particularly Guy. Creating an alpha hero who is also believably kind and an incurable romantic is quite the challenge, but Ibbotson pulls it off perfectly, mainly by showing and not telling. Guy's actions, even without an explanation for them from the author, demonstrate perfectly what he's thinking and feeling.

As for the heroine, Tessa, she's a very interesting character. I wouldn't say she's too stupid to live, but it's hard to connect with her because she seems to have no sense of self-preservation. I understand she's supposed to be innocent and pure--not necessarily sexually pure (though she is that), but pure of any vanity or avarice--and that this is part of her appeal. However, for me Ibbotson went a little too far with it and as a result Tessa is not a believable character. I'm not sure I would ever trust her to take care of herself, which soured the conclusion of the book for me. I also thought Nerine, Guy's fiance, was a bit cartoonish. If Vernon and Petunia Dursley had a daughter, she'd be Nerine in a handbasket.

As I mentioned before, the romance between Guy and Tessa is very sweet, but the more interesting aspect of the book for me was the portrait Ibbotson captured of Vienna in the early 1920s. As a piece of historical fiction, this book is really evokes a romanticized vision of the place and time, sort of like the movie Anastasia. It feels exotic and fresh because it's so unusual in YA fiction. Plus there are fun names, like Pfaffenstein and Spittau! You can't beat that.

My point being, if you're a fan of romantic stories like this, I highly recommend this novel. I wasn't blown away by it, but I did enjoy it and am more than willing to try more of Ibbotson's writing--which is the best thing about this book--in the future.